After my little adventure in Winterfall Village on Cardwyn 1.0, I thought "Hey, maybe I should take Neve there!"

And I took advantage of her fully accessible porting capability, and dropped in on Shattrath City with about 7 stacks of Winterfall Firewater...

Alas, that it was on Myzrael-US post mass migration.

My questing buddy and I were in a Discord voice group with one of our fellow Monday raiders, and I mentioned to her about what I discovered up in Winterfall Village. I didn't tell her just what would happen, but I told her that she ought to drop by with her L70 Mage and see what happens when she tries Spellstealing from multiple Firbolgs there.

I then got to thinking. I have never seen anybody mention this thing before, so I had no idea if this was nerfed in Wrath or not.

Since I had access to the Beta for Wrath Classic, I decided to make a little side trip on Neve to Winterfall Village.

With about 9 stacks under her belt, I ported into Orgrimmar...

Neve lost a few stacks here and there, but still she had a decent amount when I reached the starting Horde location for the Wrath Beta test: 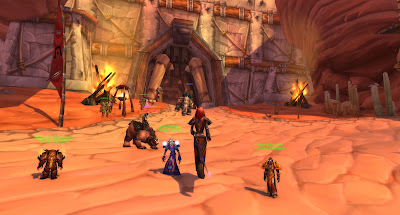 It was fun, but kind of unsatisfying. Like how you figure something cool out, but nobody really wants to share in your discovery. "Ho hum, another giant Sindorei. What a nothingburger."

And to be fair, each Spellsteal of Winterfall Firewater not only increases your size, it slows you down. After several stacks, your movements slow to a crawl, which drives me absolutely nuts. And where's the fun in that?

So... I can say that yes, Spellsteal does behave exactly the same way as in TBC Classic. But will I do it on a regular basis? Uh, no. I don't have a fetish for that sort of thing, and while it's kind of fun at first, it's... well... boring after a while. Okay, so I'm big. Now what? Well, not much.

I also must admit I like my Mages exactly the size they are. Nothing strange about that. Well, outside of the fact that they can wield the Arcane and throw fireballs around, but hey, that's an MMO for you.