Hey, at least I didn't die of dysentery

The Great College Tour is complete. Universities and colleges were visited, food was consumed, and nary a video game was played.

Hell, I didn't even THINK of MMOs or video games until our last visit of the Tour. The guide for the last university tour paused in front of a room at the Student Center and asked if anyone here played video games.

Three mini-Reds' hands shot up, along with those of a couple of other people.

Well, the guide said, this is the video game room. There are consoles and oversized screens there for people to play, and it's all free of charge.

I swear I thought I saw the mini-Reds' levitate.

Not all was serious business, certainly. We did sample the local cuisine (which, in Chicago, means Chicago style hot dogs and Chicago style pan pizza), and we took a day off and visited the Museum of Science and Industry in Chicago.

Here, have a picture of the Pioneer Zephyr --the first US streamliner-- which was donated to the Museum of Science and Industry in 1960: 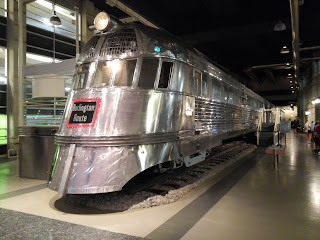 Clean Up in Aisle Four

After several years, I've finally pushed past the last Kerrals Jarvis quest in the Agent's storyline on Hutta and begun my last unfinished class story in earnest.

Even after creating another new Agent and reaching that same moral roadblock, I finally decided to bite the bullet and finish that quest. Still, that wasn't an easy thing to do.

(Spoilers after the break for the SWTOR storylines.....)

Have a Nice Trip

I spent most of the past week visiting different colleges and universities with the Redbeard clan, and while that also meant not a whole lot of gaming, I also got a lot of exercise walking around several campuses.

You see, I'd busted my foot back in early June the day of a college visit to Bowling Green State University. I was walking across our hotel's open area, where their attempt to invoke the images of New Orleans' French Quarter included masks such as these:

As I was staring at these masks that my wife compared to American Horror Story's Freak Show, I tripped over my feet and I felt intense pain in the heel of my foot. To my later regret, I convinced myself that I'd be fine and went on the visit anyway, which included a 90 minute walking tour of the campus.

I discovered just how much of a mistake that was when we left for home after the visit and stopped for lunch along the way. I simply could not put any weight on my foot without pain shooting through my heel.

After a week, I decided to visit the doctor's office since the pain wasn't going away much at all in spite of rest, ice, and elevation. The doctor took an x-ray and discovered that my foot was not in fact broken, but merely sprained. More rest and ice was the prescription.

Fast forward to a month and a half later, I can walk fairly well, but the foot is around 85-90%.

But it still isn't fun walking around college campuses, particularly those with lots of hills.

Anyway, after one of the campus tours we stopped for lunch at a hole-in-the-wall Latin restaurant. We placed our order, and while we were waiting, I noticed a couple of construction workers eating nearby. Normally, that's not a surprise, but what attracted my eye was the "Blizzard" logo on the back of one of the workers' shirt.

Sure enough, when he went to get a drink, he had a giant Horde symbol on the front.

"For the Horde," I whispered. And smiled.

Anyone for a friendly game of pick-up?

MMO players tend to be a bit of an odd breed.

No, I don't mean in the "u suck noob!" manner, and not in the "obsess over a game" manner either.

But in how a significant portion of the player base is constantly looking at new, unreleased material and that this is considered completely normal.

Imagine about 10-20% of the people who saw The Force Awakens got to see it about 2 months beforehand, multiple times, and a) got to provide detailed write-ups of the entire plot and the fights before the movie was even released, and b) used the viewings to organize friends into the optimal movie watching strategy for the Midnight showing. And consider that the really hardcore viewers were in a race to see who could finish watching the movie first, and you've got a bit of what it's like operating with the PTR servers for an MMO.

It may sound silly when converting the MMO concept of a PTR server into other forms of entertainment, but to a decent sized portion of the player base a PTR server is absolutely vital to playing an MMO. Working out boss strategies, figuring out optimal pathways to world firsts, exploring every corner of a new expac (major or minor) and writing up a world guide, and figuring out what the newest "hot" PvP class will be are all integral to the MMO experience.

For MMO developers, the PTR provides free player feedback and bug reports, so it is a win-win for them as they can tweak the patches prior to formal release. As an IT person myself, I completely get that; it's the equivalent of a QA server where people can kick the tires prior to a formal release to Production. And I like that, as it means that I have a better chance at a bug-free release.

But this also highlights what MMOs are to a certain amount of the player base: an exercise in (group) mechanics and achievements, where the theme is secondary (or tertiary, if you count the toon sex appeal on some games*).

I'm guilty as the next person for trying to do things such as figuring out a rotation or going to Elitist Jerks and try to min/max my toons' gear, but I have to wonder whether the MMO community has lost something over the years.

Go ahead and Google "legion is coming are you ready", and scan the results. I see forum and blog and YouTube posts from as far back as August and September 2015 on how to maximize your output and prep your stable of toons to be ready for when Legion drops. Remember, these are posts from almost a year ago about what, mechanically speaking, you need to do to prepare yourself for the new WoW expac that hasn't dropped yet.

To me, as a long time boardgame player, these articles remind me of discussions surrounding the hard core Eurogames, such as Puerto Rico or Tigris and Euphrates. If you hang around BoardGameGeek enough, you'll find that there's an "optimal" strategy for Puerto Rico, and if you play with some of the hard core, you'll be berated if you deviate from that strategy; yes, the exact same "L2P NOOB!!!" behavior exists in the board game community. And, like the MMOs, the theme is less important than the mechanics and the team requirements to win the game (or finish the raid). Eurogames in particular were infamous for a tacked-on theme hiding behind an optimization game, and if you were out shopping for boardgames it made a lot of sense to read the entire description on the back very carefully so you'd know whether the game is the sort that you'd be interested in or not. What might be a game that sounds like wheeling and dealing in Istanbul's grand bazaar is really an economic simulation that requires you to figure out how many wheelbarrows you need to transport goods to market to exchange for rubies. The theme itself is secondary to the mechanics behind the theme.

Comparing a Eurogame to an MMO isn't really fair, since MMOs are much bigger than any Euro, and because they are bigger, they can appeal to far more than simply the min-maxers and the others. But at the same time, those subgroups do take up a lot of the oxygen in the room.

I used to gripe at Blizzard for shoving a lot of plot and background development off screen and into their books. "The game is right there," I'd say, "why not incorporate all of this into the game instead?"

My belief was that Blizz had decided that it was cheaper to pay an author to write a tie-in novel rather than develop the story in WoW itself, and I'm sure that's still part of the equation. But what if Blizzard did this because it wanted to get some of the story out of the game? Maybe Blizzard recognized that enough players weren't interested in the story, so to preserve the story as much as possible yet still accommodate those players that weren't interested, they decided to push the story into novels. The critical path storyline is still present in the game, but all of the background material that a decent portion of the player base wouldn't be interested in was moved offline, as it were.

If this is the case, then Blizz is performing one more balancing act that I'd not have considered beyond the traditional PvE vs. PvP and the class balancing ones: how much story to incorporate in game and how much reveal before release.

I've picked on WoW a bit in this meandering post because Legion is due out soon, but this argument that MMO players are focusing so much on mechanics --to the extent that they spend time in playing the game in PTR to be ready for when the game is actually released-- could be applied to just about any other MMO out there.*** It just seems somewhat unreal when you think about it, that a player willingly sacrifices their sense of wonder at seeing something new just so that they've got their practice in when the big day comes.

In that respect, maybe MMOs are a bit like sports after all. There are those who play for purely social reasons, and those who make a commitment to dedication to work hard and do well. And then there are the pros (and the wannabee pros) who practice so that nothing is ever left to chance.

As for me, I realize that I'm never going to be hardcore, and I know that my physical skills aren't as good as they were even 5-6 years ago, so I'm not worried about being the best I can be. Competence is enough. And I know enough now to realize that while I've got elements of a completionist and a perfectionist in me, it's about the journey rather than the destination.

That's not going to keep me from griping at rules changes, and nothing screams "stay off my lawn!" more than grousing about how things were back in the day.

*gamebynight.com pretty much covered my opinion of TERA, particularly Item #4.

**I'm sure Blizz could generate statistics based on how quickly players click through quest text.


EtA: Corrected a grammatical issue. Or two.
Posted by Redbeard at 1:07 AM 6 comments:

Whatever you do, DON'T piss off a Sith

In honor of the Dark vs. Light event going on in SWTOR, I thought I'd post a link to a Taylor Davis video.

If you may recall, Taylor is the violinist who has been making videos of her arrangements of music from all corners of geekdom. People who have read PC before may recall my post referencing her rendition of Theme for Rohan by Chance Thomas for the LOTRO expansion Riders of Rohan. Well, she's outdone herself in this video, uploaded just prior to the release of The Force Awakens last December.

And yes, that's her as both Jedi and Sith.

I could have done without the synthesized backing music, but that's because I hear that and get flashbacks to the Star Wars Theme by MECO.

For the curious, here's the YouTube video of the behind the scenes making of her Star Wars Medley: