With Legion's release imminent, this arrived in my INBOX: 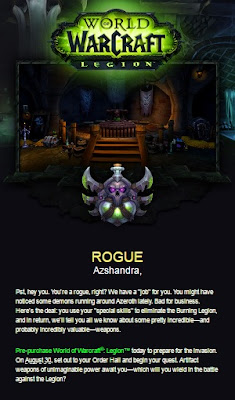 Now this is what I kind of expected from Blizz. No mention of my previous mains, however.

Best of luck to WoW players on release day!

Now This is an Odd Gear Check

And here I thought I was going to proceed with the story for LOTRO's Mines of Moria expansion without running into a grind.

But a few days later, and I'm slaying Orcs and Angmarim and Dunlendings in Eregion, grinding away at getting a legendary weapon up to L10. Apparently a legendary weapon demands sacrifice, bathing in the blood of my enemies. (Who knew?)

The next two as well.

But by the time you reach L8, you have to whack a bunch of orcs just to move up a level, and I dread what it's going to be like when I get to, oh, much farther downstream, such as L20 or so.

I had no idea that I would end up wielding Stormbringer in LOTRO.


And maybe I ought to start getting concerned about LOTRO's endgame, given how the Elric Saga ended up.

(And no, I'm not going to spoil that one; the Moorcock books are very quick reads. But given that Michael Moorcock has rather publicly stated his dislike for Tolkien's works, I'm not sure what he'd think about my comparison.)
Posted by Redbeard at 5:37 PM No comments:


Courtesy of a lot of diligent grinding --and a major boost from the LOTRO 50% off sale-- I managed to accumulate enough Turbine Points to nab the entire expansion for the Mines of Moria.

Some thanks goes to the oldest mini-Red, who has one toon on my account on this server, and did some grinding for deeds herself a while back.

But if you'll excuse me, there's a world underneath those mountains to explore.

Email ThisBlogThis!Share to TwitterShare to FacebookShare to Pinterest
Labels: LOTRO

I've always wanted to play a spy, because it is the ultimate acting exercise. You are never what you seem. --Benedict Cumberbatch

The 60's era spy genre, as interpreted by the SWTOR Agent class story, has all of the classics covered: danger, double crossing, sex/romance, an insidious enemy, and a dashing, heroic character at the center.

And no easy choices.

Although it was before my time by several
years, I'm familiar with this tune by Johnny Rivers.

I'm about at the end of Chapter 2, and I recognize all of the signs for a big reveal and/or turning point that sends me on to Chapter 3.* But the more I've thought about the class story that I've seen so far, I've been impressed with how clever Bioware has been to humanize the story and get you on the agent's side.

(Spoilers after the break)
Read more »
Posted by Redbeard at 5:58 PM 2 comments:

Email ThisBlogThis!Share to TwitterShare to FacebookShare to Pinterest
Labels: swtor

The name I'd chosen eons ago for the Blizzard forums is not Redbeard, believe it or not.

I was quite a bit more mundane and used one of my old standby forum names, because I was used to having Redbeard already taken.*

Imagine my surprise, then, when I received an e-mail from Blizzard.


Yes, ol' Redbeard is front and center in the e-mail.

I'm used to some of my toons showing up in the occasional Blizzard e-mail, such as Azshandra, Nevelanthala, and Tomakan, but this is.... different.

Just who reads this blog, anyway?

*There must be a ton of Scooby Doo fans out there. Unfortunately, I'm not going to link the episode that features the Ghost of Redbeard, "Go Away Ghost Ship", as I can see that the videos out there are pretty thinly veiled attempts to avoid copyright infringement (video is speeded up, and white dots and smudges are deliberately introduced to avoid bots.)

Methinks I need a new d20

Gen Con begins today in Indianapolis, and this year I'm going to be reduced to watching it from afar.

Due to school commitments (marching band camp) and monetary commitments (the Grand College Tour), we're going to take a pass this year.

But that doesn't mean that I won't keep up with what's going on, as boardgamegeek.com has their BoardGameGeekTV up and running over at Gen Con.

And I've  a connection on the inside, as my brother-in-law has been attending for years and is likely in line right now (~6 AM Indianapolis time).

Go forth and play games!

Posted by Redbeard at 6:43 AM No comments: