While I've got several posts in various states of completion, I really didn't have anything ready to go by today.

Therefore, I'll give you this link to Dorkly's 6 Types of Gamer Couples.  For the record, my wife and I are The Cutthroat Couple.

Posted by Redbeard at 3:57 PM No comments:

Email ThisBlogThis!Share to TwitterShare to FacebookShare to Pinterest
Labels: humor

You just knew it was coming...

They did the Fake Geek Guys video, and now this:

I found this on Dorkly first, which I also love.

As more crap seems to be flung over the Zoe Quinn Incident, it's easy to look at all this and think that the entire gaming hobby has turned into this putrid ooze of hatred and filth.

At times like this, I think of my kids and am thankful that I banned them from social media. I did it ostensibly because I wanted them to be mature enough to navigate the social morass of Facebook and Twitter, but I've since realized that it's social media that needs to grow up instead.

I suppose it's not a big surprise that I have found myself wondering what on earth the Internet is good for if it is filled with bile.


It's not an idle speculation, either. I've been on the internet in some form or another since the 80's, and I remember the heyday of Usenet. I remember the free flow of ideas, the fights and holy wars, and I remember the signal to noise ratio slowly degrading over time until people decided enough was enough and abandoned Usenet in favor of "walled garden" forums.

I wonder if we reached a similar breaking point in gaming.

The forces at work in Gamergate have been lurking below the surface, but Gamergate has exposed the slimy underbelly of the gaming world for everyone to see.  When Gamergate makes the front page of the New York Times, you can no longer say that the harassment inflicted on Anita, Zoe, and others is not a big deal. The harsh light of national media exposure  is now on the controversy.

And the Gamergaters are about to find they are not seen in a flattering light.

As I've said time and again, perception is everything. You can have the best argument in the world and have truth and justice on your side, but if you act like an ass nobody will believe you. Gamergaters don't exactly have truth and justice on their side, just coordination and creative editing tools*. In fact, a very very good case could be made that if it weren't for all of the bile directed their way, Anita Sarkeesian and her fellow critics would never have gotten the exposure they have.

I doubt that Anita is going to grace them with a thank you, however. 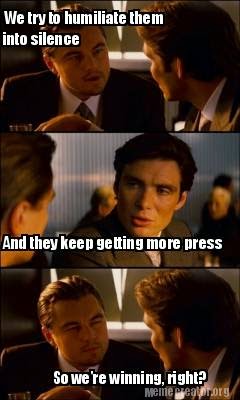 What will happen now?

Well, the dynamics that led to Gamergate --the increased participation of women in gaming and the increasing dissatisfaction on how women are portrayed in games-- aren't going to change. If anything, women will continue to participate in gaming in ever growing numbers. They're going to see the advertising, the YouTube videos, and the store displays and want to try things out too. They're going to grow up in families playing games, and they're not just going to stop because they hit adulthood.

And they're going to want games with protagonists they can identify with.

This is not a hard thing to understand.

Hell, this is not that hard a thing to program, either.

Bioware has made a living creating both male and female toons for its games. You don't see the female Trooper in SWTOR running around with a bare midriff because that'd be instant death in a firefight. Perfect World has created armor for female toons in Neverwinter that is far more realistic than what I've seen for the average WoW toon.

Wizards of the Coast, in the release of D&D Fifth Edition Player's Handbook, explicitly states that a player can play any type of character they want to.** Paizo has a long reputation for presenting women and minorities in its Pathfinder gaming materials, such as the number of women and minorities among their iconic representations of their classes.

But why don't we see more examples like this? Are we, as gamers, too focused on the next shiny to demand more? Are we going to be focused on raiding and getting to max level and all of the background art to notice that something is missing?

Or are we just content to for things to be as they are, saying that they're no longer quite as bad as Leisure Suit Larry and Spellcasting 101:


*That creative editing, ironically enough, is what some of them complain about Anita Sarkeesian doing with her series.

**"You can play a male or female character without gaining any special benefits or hindrances. Think about how your character does or does not conform to the broader culture's expectations of sex, gender, and sexual behavior. For example, a male drow cleric defies the traditional gender divisions of drow society, which could be a reason for your character to leave that society and come to the surface.

You don't need to be confined to binary notions of sex and gender. The elf god Corellon Larethian is often seen as androgynous or hermaphroditic, for example, and some elves in the multiverse are made in Corellon's image. You could also play a female character who presents herself as a man, a man who feels trapped in a female body, or a bearded female dwarf who hates being mistaken for a male. Likewise, your character's sexual orientation is for you to decide."  --From D&D 5e Player's Handbook, Page 121.

Email ThisBlogThis!Share to TwitterShare to FacebookShare to Pinterest
Labels: women in gaming

No, you read that right.

In advance of Dragon Age: Inquisition being released shortly, Origin is releasing DA:O free for the taking until October 14th.

Posted by Redbeard at 1:50 PM No comments:

Before anyone accuses me of spoilers....

...there's a new expac announced for SWTOR:  Shadow of Revan.

Yeah, that kind of gives away certain elements of the mid level flashpoints, but I'm not concerned. Looks interesting indeed, that the Revanites will have a part to play.

EtA: Removed the "the" from the title.
Posted by Redbeard at 7:51 PM No comments:

It's been a busy week at work, and I've not had much time for writing.  Therefore, check out this female Draenei cosplay instead:


Yes, there's several more pics at the site; go see it. I'm seriously impressed by the amount of work that went into it.

EtA: Fixed the broken link.
Posted by Redbeard at 5:32 PM No comments: