Guess who just got back today?
Them wild-eyed boys that had been away
Haven't changed, had much to say
But man, I still think them cats are crazy
--Thin Lizzy, The Boys are Back in Town
(I added a jump break because, well... There's a lot of photos from both my son and myself.)
If there's one truism about a trip to Gen Con, it's that I don't get a lot of sleep the night before.
Not because of excitement, although I was looking forward to going for the first time since 2013 (ish), but because of.... Whatever.
In this case, I'd set things up to get around 6 hours of sleep, which would have been perfectly fine for me, but I woke up after 4 hours, wide awake, and I couldn't do anything about it. And I just knew what it was going to mean in the end: I'd be tired on the drive back home, and I'd be hunting for a rest stop so I could zonk for 1/2 hour.
But still, I did try to rest, so that kind of helped.
All things considering, we got off to a pretty decent start, although we had a rabbit in our front yard right by the driver's side door that simply refused to move when I wanted to get in and leave.
"Come on, buddy," I told the rabbit, "you've gotta move. I have to go now."
After about 10-15 seconds of staring at me, the rabbit finally hopped a couple of times and let me in.
***
This year it was just my son and I, as my wife took a pass at being around crowds, my youngest had other commitments, and my oldest was going to get her SO back from Interlochen, where they were an instructor this Summer. Given that I was fully vaxxed and that Gen Con had a "mask on" policy the entire convention, I was reasonably confident that things would be fine. Still, I was a bit nervous when we got in line for having our vaccination status verified, 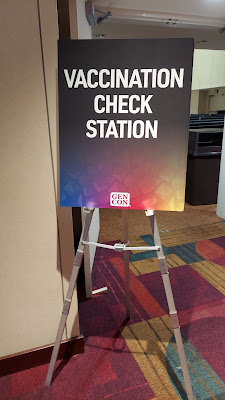 but I need not have worried. We zipped right on through the (small) line and secured our verification tag. In what became the theme of our Gen Con trip, we arrived at Will Call for our tickets and said "Well, the line doesn't seem to be too long." About 5-10 minutes later, we got through the line and got our badges. (You need your vaccination status verified before picking up your badge.) We turned around and....
The line stretched almost to the bend in the hall.
"We got here at just the right time," my son observed.
Gen Con had made some changes in the years since we'd been away. They were already more inclusive than you'd expect out of a gaming convention based in the (conservative) Heartland of the US, but they've since gone the extra mile.
The attachments shown above weren't required --I didn't bother, and neither did my son-- but if you wished to you could attach them without much of an issue. I can imagine that there were a few people who raised a stink about it, but given that it was an entirely optional thing I fail to see what the big deal is.
Another change that Gen Con had made while we were away was the designation of Cosplay Photo Area.
This was outside one of the entrances to the main hall, so it was easily found.
The Cosplay Photo Area solved what was a major problem at Gen Con, particularly on Saturday when the Cosplay Parade was in full swing: people taking pictures of cosplayers and clogging up the hallways. Rather than causing a traffic jam, here was a spot for cosplayers who wanted to have their pictures taken --and their efforts acknowledged-- in an open area without the claustrophobia of the main hall or the crowds in the hallways of the convention center. It is still considered polite to ask a cosplayer if it was okay to take a pic, but I found that to not be much of an issue.
We took advantage of the photo area to get some photos in: 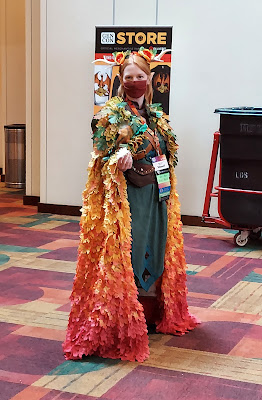