A Past That Never Was

Judge Drayton: See, I tried to make it... ALL... right. I tried to right ALL wrongs; reverse ALL of the injustices. I... I... I guess I was wrong, it's impossible.
Judge Harry T. Stone: Even a fool knows we can't reach out and touch the stars but that does not stop the wise man from trying.
Judge Drayton: I like that... Who said that?
Judge Harry T. Stone: You did. It was in a speech to the bar association.
--From Night Court, Season 3, Episode 13

I have started this post a couple of times. Each time I get partway through, and end up deleting it.

Words pretty much fail me when I consider the allegations brought against Activision-Blizzard.

Every time I look at the allegations, the angrier I get.

Every time I see the crap foisted on people such as Christie Golden, who were never part of any of this, the angrier I get.

And every time I read some comment about "it's no big deal" or "boys will be boys" or "it's all in the past", the angrier I get.

And in a weird state of suspended disbelief, all people are talking about in guild is the volume of gold you can make in the Fire Festival event in TBC Classic.*

I feel like I'm in some bizarro world bubble, where people are willfully ignoring the obvious, pretending it doesn't exist, because they don't want to rock the boat. Or let justice take its course. Or something.

And here I am, playing WoW Classic too, because I know that if I unsubscribed it would be a useless gesture. I am just one person among millions, and I've already paid for my WoW time, so there won't be any reason other than symbolic to stop playing. I am not a tastemaker, a WoW celebrity, or even well known on the server I play on, so it would only be just for my purposes only if I unsubscribed.

And I can't even bring myself to unsubscribe just for myself, because other people are depending on me.

But I feel like I have to be doing something. I mean, how can I look at my kids and think that I am setting a good example when I ought to be doing more than what I always have been doing?

These are the sort of questions that have been weighing on my mind lately.

Ever since the news broke about the lawsuit, I have logged in and done what I usually have been doing these days: farm a bit, maybe do a few other things, and help out some of our last levelers get to where they need to be. My questing buddy has been doing other things, such as running heroics or targeting quests for specific gear she needs, so we haven't done any real questing in Shadowmoon Valley or Netherstorm. (I continue to honor my commitment there.) If someone asks for help on a quest in General, I go to help out. And there's the Monday raid night I'm Loot Master on, and we've now added a Friday Kara run which will go on until we get Gruul/Mags on farm so we can throw Kara back into Monday.

It gives me time to think about how the community should be better than what we are. In game are a pale reflection of our real society, molded and shaped by our shared experiences and the game rules. There will always be asshats and dickheads, but I guess the best thing to say is to not let them win. Not let them dictate how things should be done. Call them out when you encounter it. And to be proactive in reaching out to people beyond our limited friend groups, to let them know they aren't alone.

Maybe that's what I can do to respond to my sense of rage at how badly Activision Blizzard has failed as a corporate culture: to do the things they would not and did not do to their employees. But.... it just feels so inadequate a response to do the things I already have been doing.

I alone can't change things, but enough people acting together can. And setting a good example is paramount, because that is the one thing you have complete control over. You can pontificate all you want, but if you don't walk the walk, what's the point? 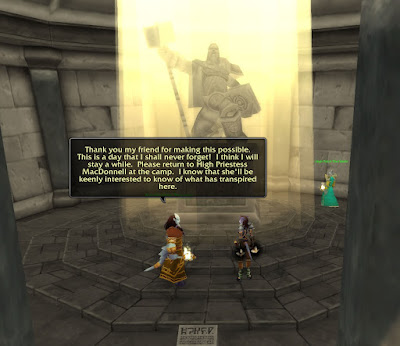 There are plenty of times I wish I had all the answers, and there are plenty more when I did know and wished I didn't. I'm not exactly sure which scenario this is.

*Card completed two intro quests and got a bar's worth of XP at L60. I could theoretically do this and level Card to at least L61 this way. Throw in some occasional farming into the mix, and I could probably get her to L63 or L64 without having to set foot in Outland at all.