Seeing as it's patch day and I'm currently watching a progress bar inch to the left, I thought I'd finally write up a post I had been meaning to do ever since getting my Quel'Delar.

I mean to capture a whole slew of screenshots to tell the tale of Krieg and his Quel, but I got wrapped up in the quest at different points and forgot the print screen button. I did manage a few shots though, and you see these after the jump!


After having given up hope on ever actually winning a drop of a hilt, (I've seen 4 drops total, but have had a total of 2515 chances at the drop) I gave up. For the record, this is 38 runs of Pit of Saron, and 37 runs of Forge of Souls only. I did not count the 7 times I have run the Halls of Reflection. So if I do the math, that's actually about a 1.59% chance that I have seen the Hilt drop.

Enter bank alt, followed by a week of auction house camping and I'm up to 10,000 gold. Which was spent shortly there after.

As far as Krieg is concerned, the best place to actually find a Hilt is the mailbox.

Upon receiving the hilt, Krieg ventures north to see what all the fuss is about. 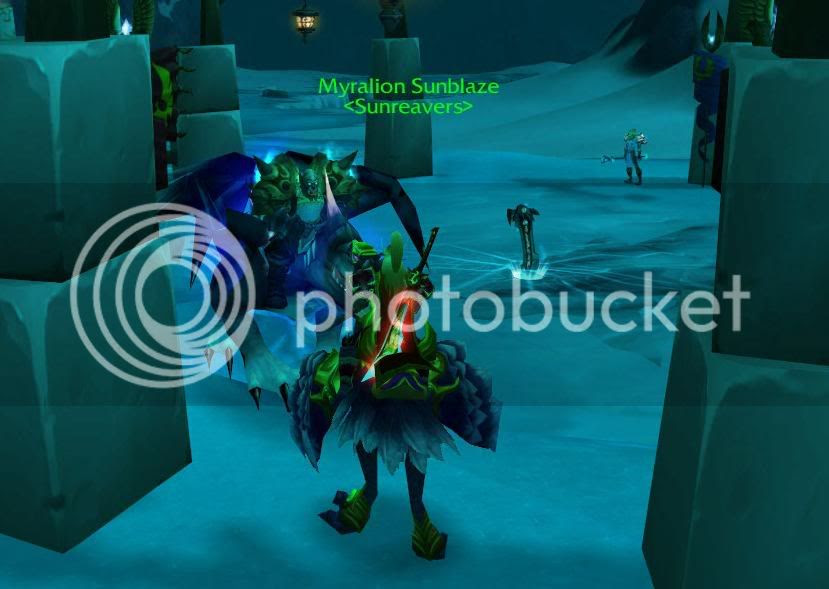 Ok, so this Blood Elf here tells Krieg that he's not sure what sword this actually belongs to, and he'll have to do some research, but mostly likely the guys at Wyrmrest Temple would know what it is. Hah!

Krieg learns something disturbing... Apparently there's two kinds of Blood Elves. Horde ones and somehow Alliance ones. They all look the same, but they wear different colors. Krieg is working for the red ones.

On to speak with the dragons.

"Ya, we made that thing, but we don't know which one it is. Go find a book. We lent it to the Alliance goodie two shoes in Dal."

Yep. That's word for word what they said. I swear.

Krieg arrives in Dal only to find out that the Blue Blood Elves (BBE) aren't talkin' and the Red Blood Elves (RBE) have no clue what's goin' on.

They send Krieg to the sewers to kill a BBE. Done and done.

The funniest thing happened... just after having exited the sewers, I'm ambushed by a BBE. Krieg finds it strangely ironic that a BBE stuns and tries to attack him from behind. Krieg knew it. Apparently, the blue version of Blood Elves are well... yeah. 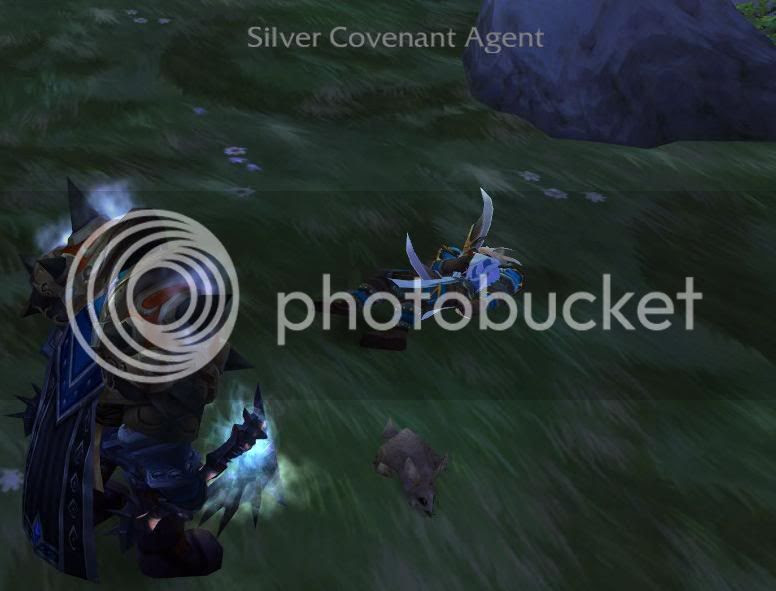 That's the end of you, twinkle toes!

Krieg needs to discover he needs to find a way to sneak into the Alliance area, and the best way to do that is find a tabbard. Apparently, the RBE has a "friend" who does his "laundry" and would have access to a BBE tabbard. Ok, both BE types are a little iffy at this point, and Kreig definitely did not enjoy playing house wife to a GNOME!

I'm in yer base, looking at your golden night elves.

Krieg deftly grabs the book finally and scoots outta there, as he does not enjoy looking like a BBE in the Alliance part of town... I mean come on, his armor doesn't even coordinate with the armor on the wolf! Such blatant disregard for fashion is more than a BBE can tolerate! 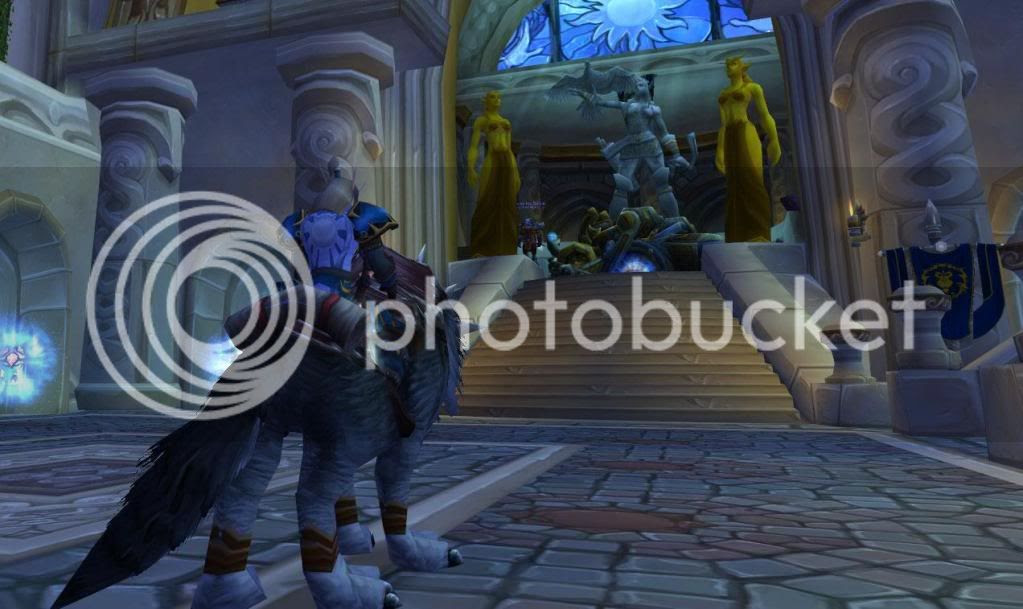 *insert awesome animation cut scene type of thing that I totally got wrapped up in watching, followed by YET ANOTHER RUN OF THE PIT, FORGE, AND THE HALLS*

After that, it was off to the aid of a RBE ghost, followed by a dip in the sunwell, and then... 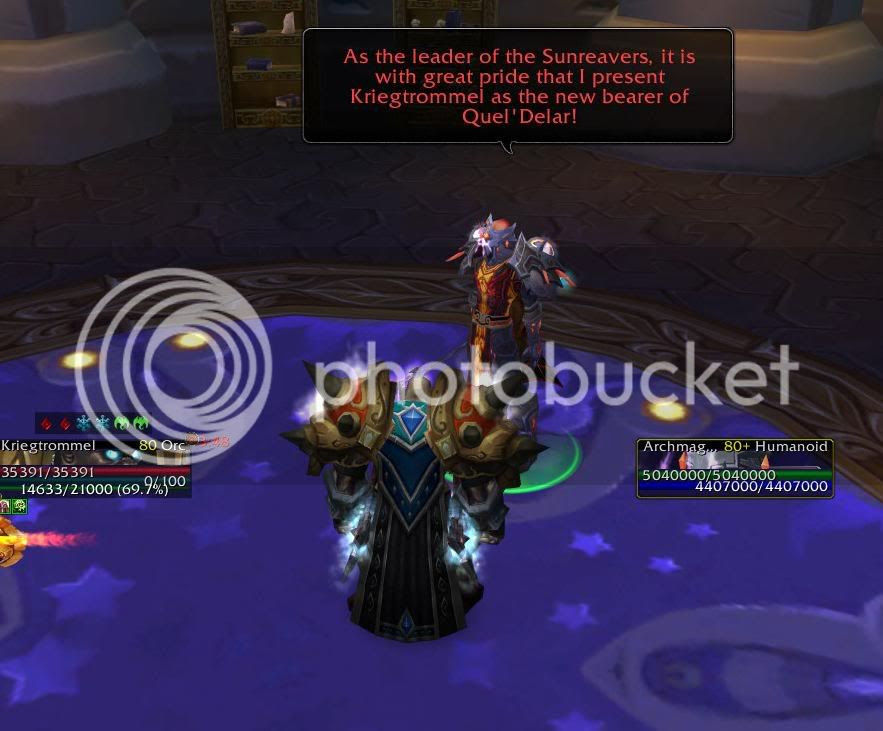